Pushing the Parameters of Reality: An interview with Marston Smith

Marston Smith has ventured with his cello from Rock & Roll, Trance Celtic, to High Fashion Euro Funk. His creative costuming borders between Cirque du Soleil, Lord of the Rings and Road Warrior. He has been a soloist worldwide, has played in recordings with Barbara Streisand, Michael Jackson, Stevie Wonder, Don Henley, Barry Manilow, Neil Diamond, and for numerous motion pictures. Recently, he is featured in recordings with KISS, Black Sabbath, Rosie Gains, Brandy, Paula Abdul, and Luther Vandross.
Sera Smolen: What was your training, originally?

Marston Smith: I studied with Geoffery Rutkowski at UC Santa Barbara and it was there that I first experimented with electrifying my cello. I was playing in a band, Little Emo, with the Mad Fiddler James Sitterly. We were doing virtuoso/comedy, like Monty Python meets PDQ Bach and Jimi Hendrix. We opened for the Beach Boys playing electric Brandenburgs. James and I would compete daily on who could log in the most practicing hours. 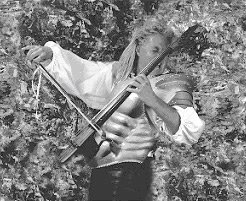 Later I got REALLY serious and moved to New York to study with Bernard Greenhouse at SUNY Stony Brook, where I received my Master’s. I was his assistant and would drive for him. Bernie asked me often about my fascination with everything Medieval. He was sure I should combine these two passions.

SS: And after graduate school?
MS: I went back to LA where I was paid crazy money to record and sideline for the film “The Jazz Singer” with Neil Diamond. That was a real thrill, and it really got me attention. Back then you could get work doing multiple sessions each day. You could record a television show like Hill Street Blues or Battle Star Galactica in the morning, then record with Earth Wind and Fire, or with Michael Jackson at A&M (I am not saying if I ever slept over with him). I played on the film soundtrack for Out of Africa and Officer and a Gentleman in those days.

MS: I shifted to my own creative work, from classical music and sessions. Of course many things were happening in the recording industry at that time. Technology was changing. Television, films, and records switched to synths and then to samples, and, of all things, to Low Budget or Limited Pressing contracts. Personally, something really changed for me when I was caught in a life-or-death moment in a firestorm, and it was about my music. From that moment on, music needed to have meaning. Money and possessions have no meaning in the middle a firestorm. Life needs music. For me, now, sitting in a chair and playing written out music in a session is dull. It has no spontaneity or expression or passion. I ask: “Where is my two handed sword, my armor, and my electric cello?” There are great epic battles to be fought!

Now, my idea of a concert is to push the parameters of reality. I want the envelope stretched in terms of audio and visual stimulation, as well as feats of physicality. I try to bring those elements into my own performance by becoming a great heroic figure created in my own imagination. When I play my own music in a street performance, in costume, I run around, showing my own imagination and passions to the fullest. I unleash parts of myself, bringing much more of myself into the performance. My palette of expression has become much wider. I become this heroic character, and I take the audience with me into the battles of Mordor. I often narrate a story when I perform. Like a wave, it sweeps us up, and we become submerged in a musical panorama of infinite possibilities.

SS: Where do you perform these days?
MS: Lately, at major corporate events, film studio openings, Las Vegas and convention center events (home shows, Irish Fairs, Renaissance Fairs). I have opened for Smokey Robinson and Earth Wind and Fire. I play at jazz festivals, Celtic Fairs and Disneyland. Live performance really does it for me.

SS: What is a typical day like for you?
MS: There is no typical day! My performances are rigorous. They run a minimum of 4 hours, usually 3 times a week, so I do cross training every day.

Ideally, I would compose, sculpt, draw, and finish the day with a sparing partner with saber, kendo, and two-handed great swords. I only read about medieval, renaissance battles, about cultures like the Knights Templer and the Pre-Adamite Sultans. I do practice when I compose, and work bugs out of sound systems. For me though, live performance itself is practice. I work best when I work directly with my imagination, the cello, and my music.
Actually, much time is spent on the phone booking and arranging gigs. Each week costumes, instruments, sound systems and vehicles need work…

SS: What cellos do you play?
MS: I have an Italian 1681 cello which I use for recording sessions, and a custom made Claudio Amagetti cello from 1998. I play a lot on my 5-string Jensen. I stand up all the time, and I play on the E string most of the time. I commissioned him to make a 3-string harp cello with a Lord of the Rings/Primordial look. It will have 12 bass strings I can pluck with my bow hand. The three bowed strings are B E and A. I created the asymmetrical design with knotted wood, and roots trailing. Another instrument Eric has just built for me has 6 strings (high E and low E).
The look is that of the Road Warrior or Terminator. With my armor, I fix devices to the cello, just like medieval knights fixed devices to their helmets for tournaments. I have a 12 stringed acoustic Celtic cello made by the Canadian maker, Dominick Zuchowicz. In addition to 5 bowed strings, including a high E, there are 7 sympathetic strings. When I hit A’s and D’s, the drone strings resonate and that cello really cranks.

SS: What are the costumes you wear when you perform?
MS: I have six different costumes. There is a Celtic kilt and an electric Mad Hatter. My favorite is when I wear the leather pants and Gothic long coat with my medieval armor, and, of course, modern euro rock boots. My armor is a combination of styles from the Renaissance to ancient Greek. So hey, if there just happens to be anyone on this earth who doesn’t love cello music (never happens) they can watch this crazed old raving armored electric cellist leap around and battle his Windmills…. I have been working for days trying to capture the perfect digital photo of myself in a new futuristic Vampire Hunter costume.