Stephanie Winters was a guest artist with the New Directions Cello Festival in 1999 in The Nudes, with guitarist Walter Parks. Since then, Stephanie has gone on tour and has been in the recording studio with a number of groups and singer-songwriters. She is currently creating some solo CD projects of her own. With a diploma from Juilliard Pre-college, an MFA in cello performance from Purchase, and an MA in Music Education from Columbia University, what is unique about Stephanie Winters’ work is the way she has made a specialty of being a support musician on the road and in the studio.

SS: How did you get started doing this?

SW: I grew up in Levittown NJ. I was the only person in my neighborhood that loved classical music, but I was surrounded by 70’s rock. In all the diners, car garages, and kitchens in my neighborhood, you could always hear the music of the 70’s. I was a bit of a loner back then. The Juilliard Pre-college was designed for the most serious and ambitious young classical musicians. I found out early that I was not so determined to play major concertos for cello like my classmates. I didn’t like practicing concertos, and was equally uncomfortable playing in the orchestra. I either felt too much in the musical spotlight, or too anonymous. I liked chamber music. There, in the string quartet, my musical voice was essential, and I could also blend into the background.

After I graduated from music school, I could not imagine professional niches for someone like me. The professional musicians I knew didn’t seem happy either, so I quit cello for five years. I taught guitar at the New School in New York. The genre was in my blood to begin with, but those years of playing songs over and over gave me an internal compass for what makes a song work. The cello crept back into my life as I was asked by the other guitar teachers to add cello on their songs.

At this point, I met David Darling. He said….”Play with love”…”Have a deep emotional connection with your music”….”sing what you play”…and….”Play what you sing”…. These principles made the connection that was missing for me between the puzzle pieces of my life. I began to realize that my musical authenticity really has it’s own unique power. It is important for each of us to make our very own music. This authenticity makes it possible to truly connect with an audience. The power of that authenticity could be all mine, whatever music I was making. I realized you can’t get into trouble following those words of David Darling. 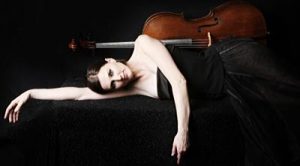 SS: I have enjoyed your playing in so many different circumstances. What makes you well suited to doing this kind of work?

SW: Through the years, I have become acutely sensitive to connecting with an audience. I have, at this point “lived on stage” more than at home, and my survival has depended on that. I toured for eight years with Walter Parks. We probably played 1000 concerts. As touring musicians spending so much time traveling together, we actually did not have all that much time to rehearse and develop our new music. Walter had an appetite for taking risks, so we found that we developed our music right on stage. It is a primal experience, truly connecting with an audience and not necessarily knowing what would happen next. It seems to draw music from me. Walter would suddenly sing acapella, or turn his guitar into a drum….

I toured with Dar Williams for over a year, and with Rachel Sage more recently. I enjoy supporting people in many more ways than just with their music. People go on tour with someone when they feel better on stage with you than without you. While on tour with Rachel, I was invited to play at the Lilleth Festival with Paula Cole. Again, I learned some songs overnight with very little time to practice. There are 15,000 people at this festival. Paula Cole’s music that night was very wild, with lots of distortion. It was very exciting and satisfying to play from that primal place of simply connecting with the audience and playing, spontaneously. 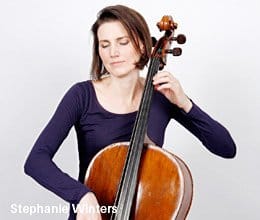 I love to figure out ways to play in any given song as little as possible. I am constantly trying in my work to get rid of the excess, paring things down to the essentials. Rock and Pop music actually invite simplicity from the cello, and a willingness to be spare makes it easier for people to play with you.

SS: How have different musicians drawn different things from you musically? What has been your process of learning other people’s music?

SW: I begin by listening. The circumstances determine a great deal. A live concert in a few hours is one thing, and a studio project with ample time is another. I write out the chord changes. I learn the words, the story that is in the song. I learn the groove.

Other people’s musical ideas do not get in the way of my voice. I try and frame the vocals, paying attention to the lyrics. I ask: “Does it sound complete?” “Is there something missing?” “Is there room for me?” “What is the character here?” Those things determine the role of the cello. From my immersion in the music of the 70’s, I love to dance. I love being part of the rhythm section, part of the groove. Sometimes I add ambience, atmosphere, and texture. Other times, what is needed is musical substance like drive, harmonic structure, and grooves.

Some people give me written out sections to work with, other people exchange ideas with me. Other times, I create the cello part entirely.

As I work, I always have a fascination with detail. I look at ways of shifting, at expressive ranges and details of color with the vibrato, imperceptible bow changes, things like that. I let myself live in a world where I decide how to finesse the slide, shape the note, and execute the colors in the most meaningful way. 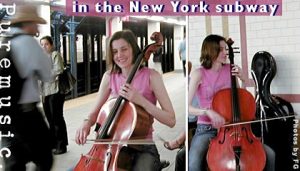 SS: Tell us about your current and upcoming projects.

SW: I have an all-cello CD in the making, which ranges from solo cello, to cello orchestra with cello soloist. It includes a variety of works that explore the expressive territory unique to the cello, aiming to capture that special quality that makes so many people say cello is their favorite instrument. I am also collaborating with Dean Sharp on another all-cello project. We are taking the cello in to uncharted territory, layering cello tracks, creating re-mixes, with an entirely different emotional impact.

SS: One more question: What kind of training do you think cellists should be getting at this time?

SW: I played in Nashville last night with Rachel Sage. As I returned home to New York, Timothy Eddy and I were wheeling our cellos through the airport. We had a short chat. He’s teaching at Juilliard. I asked him if he improvises at all. The answer was no…. I began to feel it is such a shame that such a legendary musician with such seemingly limitless command over the instrument isn’t playing his own music. Why should there be any division between classical playing and any of the other genres? I believe there is something deeper that comes into play as we drop the formalities and the restrictions of the printed page.

I hope that one day everyone at Juilliard would improvise. There would be times when they would not have to get the music “right”. There would for once not be a measure to be measured against. We, out here in the world would benefit from that. They certainly would all be happier…