The New Directions Cello Festival is a performance and educational forum for non-classical cello, featuring performances, workshops, and jam sessions led by guest artists (and their groups) who are pioneering new directions for cellists in a wide variety of styles. Keep an eye on this website for the latest information. Also join our Facebook group.

Schedule of Events and Workshops descriptions

Sunday June 5 (free and open to the public)

10% discount for members of the New Directions Cello Association. Join now or renew your membership.

This year’s special guest artists will be: 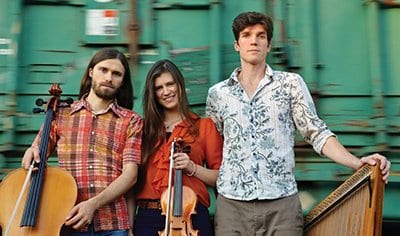 Brother-sister duo Tristan and Tashina Clarridge, long known and lauded by those steeped in the American fiddle tradition, are joined by hammer dulcimer wizard Simon Chrisman to form The Bee Eaters. Together, they weave a tapestry of sound all their own, drawing on roots in bluegrass, Celtic, jazz and old-time traditions. While today’s new breed often produces an amalgamation of sounds and styles based on a distant view, The Bee Eaters were raised embedded in these traditions… raised to mold, meld, shape them and carry them forward, leaving their own indelible marks in the process. With Tashina’s delicate fiddle and Tristan’s grounding cello wrapped around Simon’s ethereal dulcimer, they have created a never-before-heard sound in American music. No tricks. No pyrotechnics. Three instrumental voices, united in their musical exploration.

Grand National Fiddle Champion Tashina Clarridge has toured with Mark O’Connor, Tony Trischka and Laurie Lewis and has performed at Carnegie Hall as a part of MacArthur Fellow/Grammy-winning bassist Edgar Meyer’s Young Artists program. Multi-instrumentalist brother Tristan is a 5-time Grand National Fiddle Champion and a pioneering cellist, synthesizing traditional folk influences with rhythmic vocabulary from jazz, rock and pop music, and leading a revolution among adventurous young cellists throughout the country. He has toured the world with bluegrass/nu-folk sensation Crooked Still and Darol Anger’s Republic of Strings, as well as Mike Marshall, Bruce Molsky and Cape Breton fiddle phenomenon Natalie MacMaster. Hammer dulcimer virtuoso Simon Chrisman brings a whole new approach to an instrument that has previously been thought to have limited range and technique. His inventive virtuosic touch and sophisticated rhythmic sensibilities are redefining the instrument and earning the attention of musicians from all over the world.

Since their formation in 2008, The Bee Eaters have been on a trajectory of growth, both personal and musical. Recent tours have taken them from Vermont to Hawaii to England and everywhere in between, collaborating with performers such as bluegrass legend Laurie Lewis, Appalachian music master Bruce Molsky, rising-star songstress Aoife O’Donovan (of Crooked Still renown), soulful singer/guitarist Scott Law and writer/ballad singer Jefferson Hamer. Festival highlights include Wintergrass, and the 40th annual Indiana Fiddlers Gathering.

The Bee Eaters have collectively taught hundreds of lessons and workshops in communities, schools, and colleges such as the Berklee College of Music, the University of Victoria, Humboldt State University, and many others. Tashina and Tristan co-founded the Mt Shasta Music Summit, now in its 11th year, which unites the highest level of musical masterminds with musicians of all ages and skill levels, for a series of workshops and all-star concerts exploring the connections between musical traditions of the world, in a holistic community environment. The Mt Shasta Music Summit is revered by many as a powerful musical and social melting pot; young students and professional musicians come together to share, driven by a bold vision of strengthening the interwoven connectedness of music, community, and culture.

Listening to the Bee Eaters is like eavesdropping on a spirited, private conversation. As wonderful as their recorded music is, watching The Bee Eaters in live performance is an exercise in safe danger. They parry and thrust, challenging each other at every moment. Their focus on their music and on each other is tight and complete. Their melodic lines and rhythmic phrases dance (and sometimes roil) over, under and around each other. There is sometimes dissonance but always an ultimate harmony. 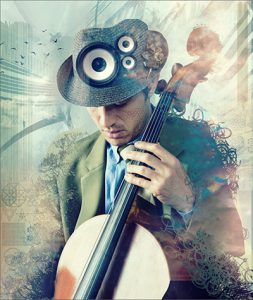 Joey Chang aka CelloJoe is an anomaly in the world of cellists. By combining cello with beatboxing, he has created a unique genre: Classical Hip Hop. Joey began playing on the street in his late teens.

CelloJoe records live on stage with a loop pedal and produces intricate tapestries of harmony, melody, and rhythm. His beatboxing (vocal percussion) and funky cello grooves form a rich soundscape for intelligent lyrics and his music spreads love, joy, laughter and conscious vibrations.

By beatboxing, throat singing, singing, plucking and bowing the cello, CelloJoe can mimic many styles of music from dubstep to folk to rock to classical to hip hop.

CelloJoe is the world’s first long distance musical bike touring cellist. He has ridden his bike with his cello over 10,000 miles in the US, Canada, Mexico, Europe and Australia. 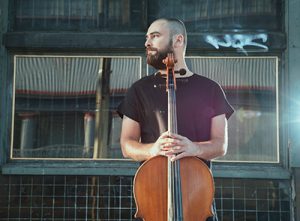 Cellist Artyom Manukyan first made his name as a musician to watch in his native Armenia and traveled the world as the youngest member of the BBC World Music Award-winning Armenian Navy Band.

Currently living in Los Angeles, Artyom is equally at home on the stages of jazz clubs, concert halls and rock festivals, performing with major international artists including Darryl “DMC” McDaniels of Run-D.M.C. fame and Grammy-winning Latin alternative rockers Draco Rosa and Natasha Bedingfield, scoring for film and television or leading his electro-jazz quartet.

Artyom’s genre-defying approach to playing the cello like a bass emerged from a combination of his conservatory training and exposure to the music of hallmark jazz bassists including Jaco Pastorius and Marcus Miller.

A native of Yerevan, the Armenian capital, Artyom was influenced as a child by the music of his mother, a classical piano teacher, and his father, a part-time DJ known as the biggest collector of jazz vinyl in Armenia.

“We listened to jazz 27 hours a day in our house,” he says. “At the time I didn’t know a cello player who played jazz, so I copied what the bass players were doing.”

Artyom spent five years completing his classical cello education at the State Conservatory, and began playing in jazz bands before joining the 12-piece “avant guard folk” Armenian Navy Band in 2006, playing the bass as well as cello.
Since moving to Los Angeles in 2010, Artyom has been in demand as a session musician and soundtrack composer, as well as performing live with diverse players like Peter Erskine, Hadrien Feraud, Charles Altura, MdCL, Tigran Hamasyan, Herb Alpert, Vahagni,VOCE, Gretchen Parlato, Virgil Donati and many more. Currently Artyom touring with his debut album “Citizen.”

Artyom will be joined at the festival by Vardan Ovsepian, an Armenia-born pianist/composer whose studies include Yerevan State Conservatory, Estonian Music Academy, Helsinki Jazz Conservatory, and Berklee College of Music. Vardan performs solo as well as with artists such as Mick Goodrick, Peter Erskine, Jerry Bergonzi and David Binney. 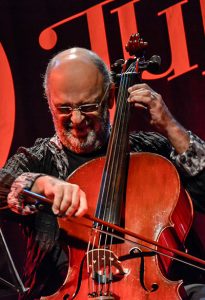 From Rio de Janeiro, Jaques Morelenbaum has been a professional cellist for over 40 years. He studied with Nydia Soledad Otero and graduated from the New England Conservatory in Boston under the tutelage of Madeleine Foley.

Since his early days, Jaques has sought out new directions for his cello playing. Jaques was already writing arrangements of Beatles and Simon & Garfunkel songs for the encores of the Pro Arte Antiqua group, (an Early Music Group where Jaques played the Viola da Gamba and conducted the madrigal), before releasing 3 albums with the group A Barca do Sol (the 1st of them produced by Egberto Gismonti). After that Jaques joined the heavy rock group Antena Coletiva and later A Barca do Sol. 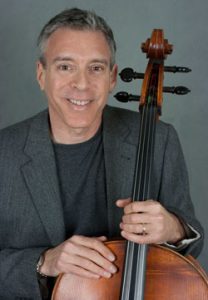 Widely regarded as one of the outstanding cellists of our time, Mark Summer is known worldwide for his phenomenal percussion and pizzicato techniques combined with bowed jazz and fiddle phrasing. Mark is a co-founder of the two-time Grammy®-winning Turtle Island Quartet, and was the quartet’s cellist for 30 years. He is a graduate of the Cleveland Institute of Music where he was a student of former principal cellist of the Cleveland Orchestra, Stephen Geber. In 2008, he was awarded a Distinguished Alumnae award from CIM. Mark was a tenured member of the Winnipeg Symphony from 1981–1984, before leaving the orchestra to perform in several Canadian contemporary and Baroque ensembles, as well as his own group, The West-End String Band. Asked to perform at the Winnipeg Folk Festival in 1985, the group went on to record Mark’s original music for CBC Radio. In the fall of 1985, Mark visited the Bay Area where he was invited by David Balakrishnan to help form Turtle Island Quartet.

Mark continued to touch base with his classical roots, performing with the Chamber Symphony of San Francisco, the Oakland Symphony, Oakland Ballet, and the contemporary music ensemble, Earplay. Over 30 years since embarking on an improvisational musical odyssey, Mark has continued to develop a unique and multi-timbered style, which incorporates virtuoso jazz soloing, distinctive bass lines and extensive percussive techniques adapted from the guitar, bass and drums.

He has been the subject of feature articles in Strings and Bass Player magazines, and has published several pieces for solo cello; his best known and beloved “Julie-O,” has been performed by cellists all over the world, and was featured on two episodes of NBC‘s “Parenthood.”

In addition to composing and his past performances with Turtle Island Quartet, Mark currently performs in a trio with jazz vocalist Tierney Sutton, a seven-time Grammy®-nominated singer. Mark also performed in a trio with clarinet virtuoso Paquito D’Rivera of which their recording, The Jazz Chamber Trio, was nominated for a Grammy® in 2005, and includes Marks piece “Kalimba” for solo cello.

In 2011, he made his American debut as an orchestral soloist, premiering David Balakrishan’s cello concerto “Force of Nature,” written especially for Mark. In 2013 he had his European solo premier, performing the concerto with both the Neuss Chamber Orchestra and the Georgian Chamber Orchestra Ingolstadt. For the last three summers, he has taught and performed recitals at Cello: An American Experience, a program for young cellists. www.marksummer.net 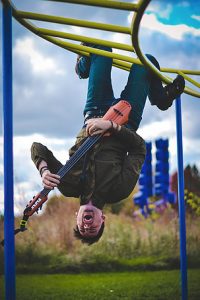 Since Greg started playing cello at 2 1/2 he has immersed himself in many branches of music, each cumulative aspect elevating the others: performance, composition, recording, education, entrepreneurship. His debut EP Some Dark, Beautiful Morning was orchestrated jazz fusion, but his newer work finds Greg as singer/songwriter; a nuanced interplay of natural and artificial, nature and technology. The language of music is unique in that it can provide every listener with similar yet distinct messages of truth, beauty, freedom; this has motivated Greg to express his own authenticity through precise songwriting and improvisation. http://www.gregbyersmusic.com/

The New Directions Cello Festival is a performance and educational forum for non-classical cello, featuring performances, workshops, and jam sessions led by guest artists (and their groups) who are pioneering new directions for cellists in a wide variety of styles. Keep an eye on this website for the latest information. Also join our Facebook group www.facebook.com/groups/136856902991541/