10% discount for members of the New Directions Cello Association.    Join now or renew your membership.

This year’s special guest artists are: 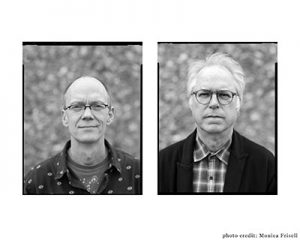 A special first-time duo performance for Hank Roberts and Bill Frisell , who have been friends and musical collaborators for 39 years. They have performed together in a host of different ensembles. Frisell is revered among musicians and music lovers, and has been described as being at the very epicenter of modern American Music. Roberts is recognized as an important contributor to modern cello playing and improvisational music. 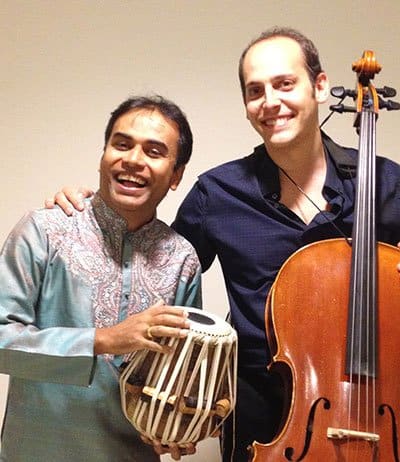 First brought together by Yo-Yo Ma in his Silk Road Ensemble, Sandeep Das and Mike Block are two virtuosic musicians adept at bringing contemporary approaches to traditional music styles.  They performed at Carnegie Hall to celebrate the 15th Anniversary of the Silk Road Ensemble, and received a rave review by the New York Times.  Visit Mike’s website, Mike Block Cello. 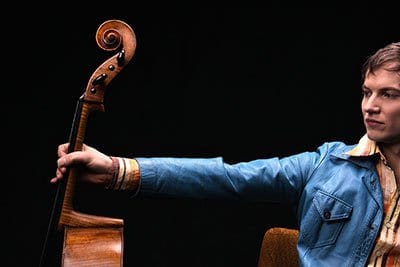 Stephan studied classical cello and jazz cello at the universities in Hamburg and Berlin. He has performed in different projects with Schauspielhaus Hamburg, Berliner Ensemble, NDR-Bigband and he has worked as a sideman with Melody Gardot, Nils Landgren, Gil Goldstein, Chris Hinze, Don Thomson, Till Broenner, Giora Feidman, Kristjan Randalu among others. In 2010 he won the 1st price of the International Jazz Competition in Bucharest with his trio. He has played at many famous festivals and concert halls, like Vienna Opera House, Amsterdam Concertgebouw, Paris Olympia Theatre, Pori Jazz Festival, North Sea Jazz Festival, Umbria Jazz Festival, Montreal Jazz Festival and recorded as a sideman on more than 20 CD’s. As a leader he has made 2 of his own records, one with his trio (called The Raid, released 2008) and one with his singer songwriter project deep strings (called Façon, released 2012). Stephan Braun answers the question once and for all of what the true domain of the cello in jazz is: groove. He currently resides in Berlin.  Visit ‘Stephan Braun: Jazz Cello’. 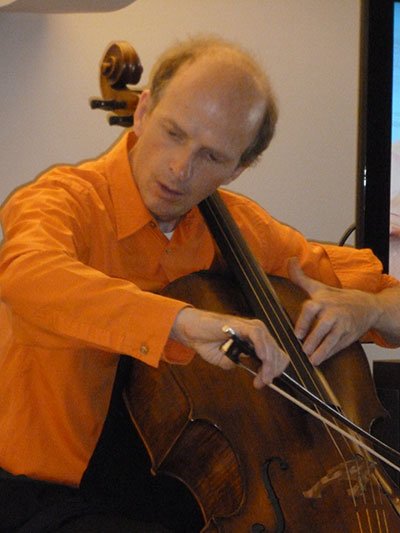 For Pierre Michaud, creating a new cello piece always feels like a dream come true. From his roots in Québec to his current home in Belgium, through over 40 years of playing and composing, Pierre has crafted an exciting personal repertoire, featuring many technical innovations while cherishing a deep warm acoustic sound, as shown on several self-produced CD’s & DVD’s. “Well chosen notes have a tremendous power of expression by themselves ; what you can convey through committed and sincere interpretation only adds to the magic”, he says. With performances from Europe to the Americas via the Middle East and Africa, Michaud offers a unique blend of many influences. 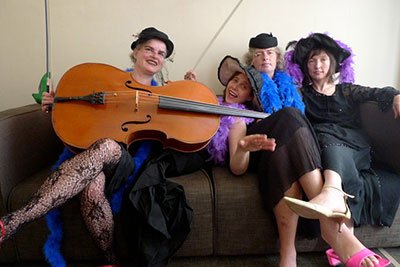 Cello en Vogue is an ensemble of female cellists who compose and improvise and work with actors, using live-electronics, steel-cello, saw, glasses, field-recordings in their collective compositions and improvisations, theatre and soundscapes. Three members of the ensemble (Corinna Eikmeier, Marei Seuthe and Krischa Weber) will be in Ithaca this year. Joining them for a special performance will be Boston based violist and composer Forrest Larson and cellist and NDCF co-director Sera Smolen.   Visit their Facebook page. 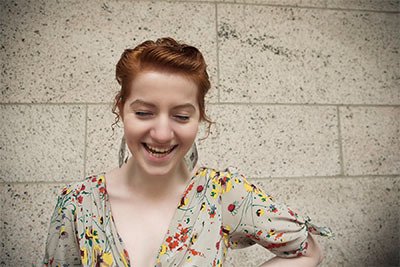 Emma Beaton, young cellist and singer from Qualicum Beach, British Columbia has what bluegrass super-star Laurie Lewis called, a “voice like a laser,” clear, effortless, and striking to the core.

The child of two Scottish emigrants, Beaton is no stranger to the traditional music realm. She learned to play the cello amongst seas of fiddlers under Alasdair Fraser’s San Francisco Scottish fiddlers and at music camps around the US. This forced her to develop her own style of folk cello, adapting dance tunes for the instrument and conjuring up her own rhythmic accompaniment style to suit the fiddle repertoire.

She has studied with other notable innovative cellists, under Natalie Haas at the Berklee College of Music as well as with Tristan Clarridge and Rushad Eggleston, both of Crooked Still. She has appeared on Scottish national television, performed at the Aberdeen Youth Arts Festival, and guested with Alasdair Fraser, Bruce Molsky, Back of the Moon, and Hanneke Cassel.

At the age of eighteen, Beaton won the Canadian Folk Music Award’s Young Performer of the Year after the release of her debut recording, “Pretty Fair Maid.” A year later, after moving to Boston to study cello on scholarship at Berklee, Beaton’s grace and flair remain, now magnified by a year at conservatory.

She presently sings with the modern American string band Joy Kills Sorrow, which recently released the band’s first release with Beaton as frontwoman, titled Darkness Sure Becomes This City. Emma has also recently released a duo record with bouzouki-player, singer, and dancer, Nic Gareiss, which is available for purchase here.  Find out more at her website: http://www.emmabeaton.com/Emma_Beaton/Home.html