1:00 PM Yaniel Matos: Cuban Therapy Jam Session: Mandinga Mondongo Sandunga
We will look at a classic rhythm in Cuban jazz, and one syncopated rhythm. Everyone will be invited (but not required) to take a solo improvisation. (all levels)

2:10 PM Zach Brown: The Modern Cellist
The cello can do anything and be everything. It is especially important now, at this juncture in musical history, that each cellist discover how this plays into their own personal development. (all levels)

3:20 PM Chris White: Creating and Performing on Solo Cello
Using three or four of his original compositions and arrangements, Chris will share some of the techniques he has developed for writing and arranging for solo cello, including improvisation. Creating a cello piece that can hold up without accompaniment or looping requires knowledge of chords, keys, scales, and more. Incorporating improvisation in the context of a solo cello piece requires advanced skills, knowledge and experience: prepare to see behind the curtain! (intermediate/advanced)

4:30 PM Cello Big Band: Rehearsal #1
The Cello Big Band (CBB) is a cello choir made up of any cellist associated with the festival (participants, guest artists, staff) interested in reading and performing works for many cellos, featuring contemporary arrangements and compositions, many of which have sections for improvisation.

9:00 AM Corbin Keep: Tricks, techniques and technologies of transcribing music from recordings.
Lifting solos and licks directly from recordings is a fabulous way to improve one’s ear and be taken in new directions on the cello. In this workshop, we will examine some tricks for make transcribing easier, as well as getting the most out of our transcriptions. (all levels)

10:10 AM Tomeka Reid: Improvising over the blues
Learn the blues scale in all keys and how to solo over a basic 12 bar blues form. (beginning/intermediate)

11:20 Gunther Tiedemann: Strumming Chords on the Cello
We will learn fingerings for standard chord types: major, minor, diminished, half diminished and augmented with 6th, 7th, or major 7th, combined with strumming patterns or a mixture of bass notes and strumming. We will then incorporate these into the chord progressions of some songs. (intermediate/advanced)

11:20 AM Sera Smolen: Off the Page
Play blues, ii-V-I’s, funk, a Japanese pentatonic piece, Bossa, a gypsy scale and more. We will read through a collection of charts, using 0-3 sharps and flats. These songs are designed to teach cellists how to modulate keys and improvise in different styles. (beginning/intermediate)

1:30 PM Malcolm Parson: The Art of Creating Walking Bass Lines I
For cellists who are interested in playing a key role in accompanying fellow musicians and colleagues, we will focus on utilizing the cello as a bass. Come ready to explore pizzicato techniques, construct successful bass lines, and the beginning phases of improvising a cohesive solo. Have you ever wanted to be able to read chord symbols too?  This is the session for you! (beginning/intermediate)

1:30 PM Jake Charkey: Introduction to North Indian Classical Music on Cello pt. II
A continuation of the techniques used for Indian classical music, including some rhythmic concepts. Participants will learn a composition and we will discuss how some of the concepts covered in the two workshops can be applied in other improvising contexts. (advanced)

3:50 PM Panel Discussion: On Being a 21st Century Cellist
Several of this year’s guest artists and clinicians will participate in an open discussion, sharing their experiences and insights on how to be a well-rounded cellist and how to survive in today’s world as a musician.

3:50 PM Sera Smolen: Silent Movie Jam
Sera will choose a silent movie and talk about improvising along with it.  Everyone will have a chance to try their hand at this fun way to interact with images on the screen and create an improvised soundtrack.

9:00 AM Jake Charkey: Alaap Jam Session
Join Jake for an early Sunday morning North Indian Alaap to be played peacefully in a call and response format. (all levels)

9:00 AM Malcolm Parson: The Art of Creating Walking Bass Lines II
For cellists who are interested in playing a key role in accompanying fellow musicians and colleagues, we will focus on strategies for creating a bass line which outlines the chord changes. Come ready to explore pizzicato techniques, constructing successful bass lines, and the beginning phases of improvising a cohesive solo. (intermediate/advanced)

10:10 AM Yaniel Matos: Cello Samba Rumba
This workshop is about Cuban and Brazilian grooves, and how can you put them together with improvisation. We will begin by learning rhythms; later we will create a groove together. We can all take a solo improvisation as well. First the rumba, then the samba! (all levels)

The New Directions Cello Festival is a performance and educational forum for non-classical cello, featuring performances, workshops, and jam sessions led by guest artists (and their groups) who are pioneering new directions for cellists in a wide variety of styles. Keep an eye on this website for the latest information. Also join our Facebook group. 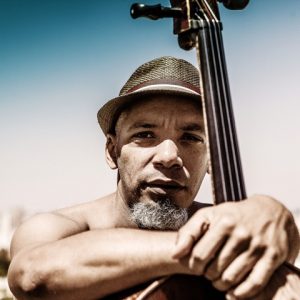 Matos began studying cello and piano at the Conservatorio Estevan Sala in Santiago de Cuba when he was 8. In 1994 when he moved to Havana to study Composition where he graduated from the Instituto Superior de Artes.  In 2000 he moved to Sao Paulo, Brazil and became a member of the Department of Popular Music at Escola Superior de Música da Faculdade Cantareira responsible for piano related courses. He has released 4 albums: “Um Dia de Chuva,” “En Movimiento,” “Depois,” “La Mirada.”

In 2017 he will release “Vôo” and “Carabali.” ”La Mirada’’ was named by Music Resource Group (MRG) as a Nominee of the 14th Independent Music Awards (The IMAs), the influential awards program for independent artists and releases at the category Jazz with Vocals.  http://yanielmatos.weebly.com 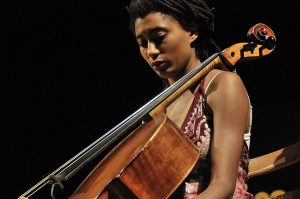 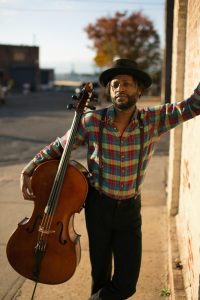 A native of New Orleans, cellist Malcolm Parson has been hailed as “the most creative cellist of his generation.” He studied at Atlanta Symphony Orchestra’s Talent Development Program and at Berklee College of Music in Boston. He gave his first performance as a soloist with an orchestra at age 14. He made his debut in Atlanta with the Atlanta Symphony Community Orchestra after winning their Young Artist Competition, and followed with debuts at The National Black Arts Festival “Classics from the Next Generation” and Andre Watts’ 50th Birthday Celebration.  He has shared the stage with musicians and bands such as James Lauderdale, Della Mae, Del McCoury, Old Crow Medicine Show, Marcus Mumford, Bela Fleck & Abigail Washburn, Ron Carter, Paquito D’Rivera, Patrice Rushen, Toshi Reagon, Cyrus Chestnut, Terri Lynn Carrington, and Dave Liebman  as well as performing at major festivals such as Northsea Jazz Fest, New Orleans Jazz and Heritage Fest, Austin City Limits, Bonnaroo, and Stutggart Jazz Fest.  “He is that rare player with feet planted firmly in classical music and the music of our time while possessing perfect intonation, fluent technique and stylistic versatility.” – Eugene Friesen. http://www.malcolmparson.com/ 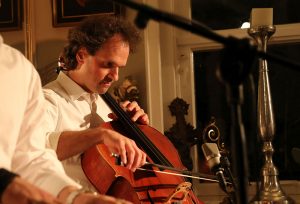 Tiedemann is a German jazz and pop cellist, ensemble director, composer, author and lecturer. As a freelance cellist, he has played with Ernst Reijseger, Stephen Katz, Markus Stockhausen, Nelly Furtado, a.o. and has toured Europe, USA, West Africa and Pakistan. His compositions and arrangements have been published by Breitkopf & Härtel. He is lecturer at Music University Hochschule für Musik und Tanz in Cologne where he directs the String Big Band and teaches pop chamber music and coaches ensembles, etc.. He also teaches at the Rheinische Musikschule in Cologne. He has worked with the Jena Philharmonic Orchestra as composer and soloist, the National Symphony Orchestra Ghana, Deutsche Streicherphilharmonie, Chamber Orchestra of Groove (Germany), RMS Cello Big Band, Cello-Orchester BadenWürttemberg and has given workshops for the Goethe Institut as well as various universities, academies and associations.    www.gunther-tiedemann.de

Pianist, Thomas Rueckert plays solo, with his trio and as a sideman in clubs, on Radio, TV and at festivals. Rueckert has played with Lee Konitz, Randy Brecker, Mark Murphy, Adam Nussbaum, Greg Hutchinson, John Goldsby and many others. www.thomasrueckert.com

Gunther Tiedemann and Thomas Rueckert play their own music grounded in the jazz tradition with influences from traditional and contemporary music. 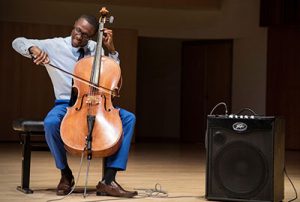 Zachary Brown is a cellist, hailing from Brentwood NY. Born in Queens NY, Zach began cello at the age of thirteen. Now a college graduate, he studied at the Ithaca College School of Music. Zach has also been studying jazz in recent years, and has completed a degree in cello performance while concentrating in jazz studies. Zach has been cultivating a sound in jazz, bluegrass, blues and hip hop to bring a fresh, diversified sound in the cello world. He is a two-time attendee of the Acoustic Music Seminar and the Savannah Music Festival under the tutelage of Mike Marshal and Julian Lage and taught a workshop at the New Directions Cello Festival on 2015. Zach is currently based out of Long Island where he is a fulltime teacher.

Grant Flick, of Bowling Green, Ohio, has been playing and performing for the past seven years on many instruments including violin, mandolin, and tenor guitar. Primarily, his interests are jazz/swing, bluegrass, and new acoustic music. He has received numerous music awards including the 2013 Daniel Pearl Memorial Violin, and he was a 2015 finalist in the Walnut Valley Festival Fiddle Competition in Winfield, Kansas. He has been selected as a two-time participant (2015 and 2016) of the Acoustic Music Seminar held at the Savannah Music Festival in Savannah, Georgia. He has performed at the Grey Fox Bluegrass Festival, Red Wing Roots Festival, Indiana Fiddler’s Gathering, and many other festivals.

Bass player Jacob Warren’s passion for acoustic music has led him to pursue a wide range of musical genres, from classical to Cajun, folk, jazz and more. He loves to blend these influences, and find the connections between different music styles. Intense collaboration and constant learning are some of the greatest joys Jacob has in music and in life.

Matthew Davis is a young banjoist based in Nashville Tennessee. He writes and performs music ranging from bluegrass to jazz and even classical music. He is an alumnus of the Nebraska All State Jazz Band, and the winner of the 2016 National Banjo Contest. His goal is to make music that excites the audience, challenges himself and furthers the development of acoustic music. 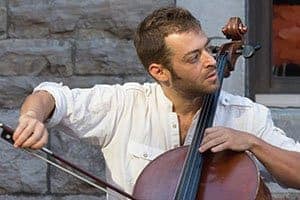 Jake Charkey is an acclaimed cellist with a strong background in both Western classical music and Hindustani music. He is also an eclectic improviser, drawing from eastern and western musical traditions, jazz, reggae, hip-hop, and his roving imagination. He is a sought-after studio recording artist in the film, television and music industry in both India and the USA. Jake completed his conservatory training at the Shepherd School of Music in Houston, TX.  He studied Hindustani music in Toronto, L.A. and in India with Aruna Narayan, Jagan Ramamoorthy, Aashish Khan and Swapan Chaudury and is a disciple of the violin virtuoso Padmabushan Dr. N. Rajam in the rare Gayaki Ang style. In L.A., he completed his M.F.A. at Cal Arts in Hindustani music. During his time at school, he stretched himself musically, learning from avant-garde jazz innovators like Vinny Golia, Adam Rudolf, and Wadada Leo Smith as well as playing bass and cello with L.A. reggae and hip-hop bands. After grad school Jake moved to Montreal, where he founded a ten-piece klezmer orchestra, perfected his busking skills, and continued to perform Hindustani music, both as a soloist and accompanying Kathak dance. In 2010 he went to India with an arts fellowship from the Shastri Indo-Canadian Institute to support formal study under Padmabushan Dr. N. Rajam. Jake has performed and recorded with numerous artists in India, the U.S. and internationally. In 2015 he started Rose Productions with Veronica Simas de Souza, a music startup dedicated to building musical bridges between India and N. America.