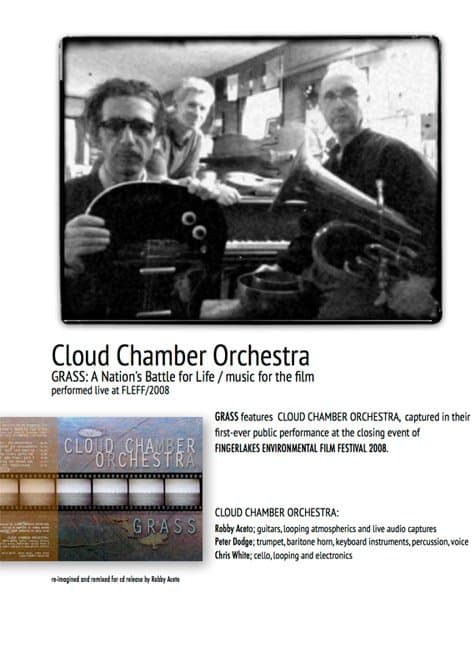 When: Saturday October 20th at 8 PM

Cloud Chamber Orchestra is pleased to announce the CD release of their first ever recording; GRASS: music inspired by the film and they plan to celebrate the release with a night of their unique style of improvised music at the Carriage House Hayloft on Saturday October 20th.

“Searing, haunting, mesmerizing, the Cloud Chamber Orchestra’s brilliant improvised score for the landmark documentary GRASS (1925) rewires the relationship between live music and silent film…sharply considered, intellectually rigorous, their exquisitely rendered music winds itself deep into the listener, and leaves us somewhere we do not know, but where we need to be…they exert a profound respect for archival (film) material, and how their contemporary musical strategies can work to exorcise what is latent in the images of a previous century…”

Recorded live at the closing event of FINGER LAKES ENVIRONMENTAL FILM FESTIVAL2008, their sumptuous, atmospheric score for GRASS is a must have for fans of genre-busting improvised music.

sample tracks and more information at