The seeds for the New Directions Cello Festival were planted in 1987 while I was researching for a lecture recital on The History of Jazz Cello as part of my Master’s Degree at Ithaca College. During that time I spoke with numerous cellists including Ron Carter (cello was his first instrument), David Darling, David Eyges, David Baker (why so many Davids?) and Sean Grissom, among others. The following year (1988) I performed at the 1st World Cello Congress with my jazz quartet. In addition to getting a Russian bear hug from Rostropovich (just turned 80!)after my performance, I “hung out” with several non-classical cellists including Sean Grissom, Eugene Friesen, Aaron Minsky, and Nancy Blake.

In 1992 my quartet performed at the Quinzaine de Montréal – a 2 week cello festival with everything from baroque to avant garde (Tom Cora, Ernst Reijseger, etc.). In 1993, Hank Roberts moved to Ithaca (making 3 new directions cellists in my town along with Sera Smolen). By this time, I was hooked on the idea of bringing cello renegades together, and I published the first issue of our newsletter, Cello City Ink, in 1994.

Occasional meetings, mainly in New York City, with Fred Lonberg-Holm, Dawn Avery (formerly Buckholz), Aaron Minsky, Jane Scarpantoni and others, eventually led to the precursor to the festival which was called the “Night of the Living Cello.” This was held at the old Knitting Factory (thanks to Michael Dorf) in SoHo in lower Manhattan. On June 5, 1994 Fred Lonberg-Holm, Michelle Kinney, Tom Cora, Boris Rayskin, Chris White, Rufus Cappodoccia, Jane Scarpantoni and Aaron Minsky performed an unforgettable concert.

In an effort to save space, I will only list the cellists who have performed at our annual festivals. It should be noted that most of our guest cellists performed at the festival with other fine musicians or groups. It is both fascinating and important to see how new directions cellists collaborate, interact and work together with other instrumentalists and singers in a very wide variety of styles. We have presented everything from folk to avant garde jazz, passing through Afro-Hungarian jazz, Celtic rock, Middle Eastern funk, theater, poetry and on and on.

The 2nd New Directions Cello Festival took place in Boston at Berklee College of Music and was held concurrently with their first “Summer String Fling,” run by violinist and Berklee professor Matt Glaser. Guest artists for our festival #2 were Mark Summer, Erik Friedlander, Cameron Sawzin, Matthew Brubeck, Sera Smolen, Boris Rayskin, Ina Kemmerzehl, Glynis Loman, Enrique Orengo and Craig Hultgren. Mark Summer was joined by Darol Anger who was then playing in the Turtle Island Quartet with Mark. 1996 was the first year to feature an Exhibition of electric cellos, pickups and other related items. We have had an exhibition every year since. Where else can you try out and hear a variety of electric celli, gear, pedals, pick ups, music, CD’s etc?

In 1997 the New Directions Cello Festival moved to the University of Connecticut in Storrs. Thanks to Mary Lou Rylands, professor of cello at the university, we enjoyed six wonderful years there. Guest artists the first year there were David Darling, Stephanie Winters (the Nudes), Peter Lewy, Chris White, Gideon Freudmann, Stephen Katz, Jeffrey Krieger and Rufus Cappodocia. This was the year we added the Young People’s Cello-Bration where young cellists ages 8 – 16 participate in the festival for our big day, which is always Saturday.

Still in Connecticut, New Directions Cello Festival 1999 featured David Baker, Chase Morrison, Matt Goeke (with Voltaire), Nioka Workman, John Pointer and Woodwork, Vernon David & Continuum, Stephen Katz (Seen & Heard). This was the first year of our Cello Big Band, which is a cello orchestra which performs new works or arrangements of a non-classical nature. The director of the CBB was Chase Morrison. She continued in this role for 2 years. The CBB allows for participants, staff and guest artists to all make music together. It is featured in our closing concert on Sunday afternoon.

New Directions Cello Festival 2001 featured Ernst Reijseger (Holland), Erik Friedlander, Rasputina, Peter Markush and Big Fiddle, Akua Dixon & Quartette Indigo and Chris White (I try not to invite myself EVERY year). This was the year that cellist Joel Cohen took over the baton of the Cello Big Band, which he has held firmly in his hand ever since (except when he puts it down to pick up his cello bow! 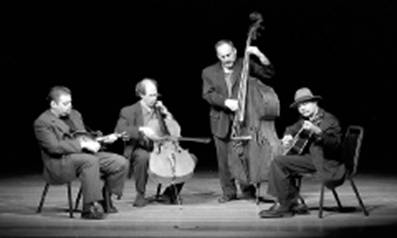 In 2003 we moved the festival to Lawrence University in Appleton Wisconsin. Cello professor Janet Anthony helped us make connections at Lawrence. Also helpful at Lawrence was cellist and pianist Matt Turner who taught jazz and improvisation there at that time. Guest artists were the groups Chance (Ed Willett cello), Wyndfall (Laurie Haines Reese cello), and the Neptune Quartet (Crispin Campbell cello), as well as Sera Smolen (with Tom Mank)and Matt Turner.

In 2006 we moved the festival almost all of the way to the west coast, finding our new home at California State University Sacramento. Cello professor Andy Luchansky was our gracious host and helped open the doors for the NDCF’s western expansion. Sharing their special musical talents with us last summer were Yoshi (Japan), Barry & Shelley Phillips, Quartet San Francisco (Joel Cohen cello), Jami Sieber, Natalie Haas (with Alasdair Fraser) and Sue Schlotte (Germany). 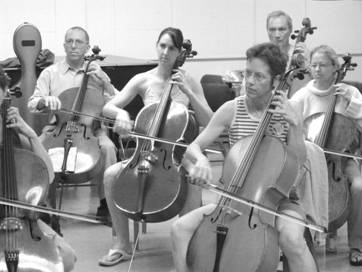 Since the beginning, an important feature of the festival has been the workshops. Cellists come from far and wide to learn what others are up to. The festival usually runs from Friday at noon to Sunday mid afternoon and is packed with workshops and jam sessions in addition to the concerts. One of the few complaints we hear is that there is too much going on! We usually have beginning workshops scheduled concurrently with more advanced workshops. Improvisation in different styles is a big focus of the workshops, but we have had a wide range of very interesting workshops over the years from “how to amplify your cello” to “how to sing and play the cello at the same time,” making weird noises, play over changes, even including panel discussions of the business side of being a non-classical cellist, and many more.

Sera Smolen has always had a great interest in the educational side of the festival and has helped organize and coordinate the workshops and jam sessions. She has written dozens of interviews with many of our intriguing guest artists, making Cello City Ink more engaging. Sera loves to help plan the festival throughout the year…and it IS a year long operation. Dr. Sera is now the assistant director. (Over the years many people have thought we were a couple, but we’re not. We’re just a couple of dedicated new directions cellists!).

One of the most fun aspects of all of the festivals is social interaction. This reaches it’s peak around 1 or 2 am on Saturday night (okay Sunday morning) in the dorm when the (spontaneous) jam sessions are found here (in the lobby) and there (in the stairwell) and everyone is feeling very loose…This is one of the best environments to encourage people to lose their inhibitions about improvising in front of others!

Of the participants who have attended more than one festival, there is one notable person to point out: Evan Evanson has attended every festival (except the first one). He is often seen roller-blading through campus during festival weekends! Although he regrets having missed that first one, we are grateful to him and all the countless other maverick cellists who keep coming back. It is they, along with the many volunteers, who help transmit that special new directions cello festival energy from one festival to the next – that certain “je ne sais quoi.” There is an unforgettable atmosphere of sharing and caring each day of the festival. It is a truly a non-competitive thrill, this “playing-outside-the-box.”

One exciting development on the horizon is the opportunity to become a not-for-profit corporation. While we have been wanting to do this for years, we now have an anonymous benefactor who would like to give us a donation. This is just the incentive we need to make this happen. Once we have our 501(c)3 status, we hope to encourage other individuals and companies to donate to the New Directions Cello Association & Festival. Part of becoming a non-profit is establishing bi-laws and a board of directors. If you are interested in helping with this process or in becoming a member of the board, or if you know a lawyer (especially a cellist!) who might like to help, please let us know!

It is hard to believe that the New Directions Cello Association and Festival are almost 15 years old! With two issues per year we have now published 26 issues of Cello City Ink! The newsletter, website and word of mouth are the main tools we use to promote the newest directions in cello. Special thanks goes to all the guest artists who have graced our stages – literally a “who’s who” of nonclassical cellists – who have given so generously of their talents and time. Without them we would have been just another idea that never saw the light of day. We welcome any ideas or help to make sure this special little niche in the music world continues to thrive.