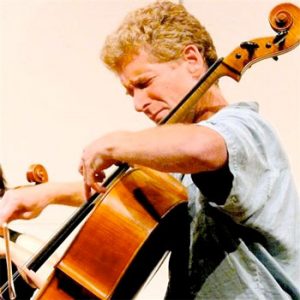 Based in Ithaca New York, Chris White has been exploring new directions for the cello since the late 1970’s. Whether playing in an intimate duo with piano or guitar, with a jazz string quartet, or with his groups the Cayuga Jazz Ensemble or the Cloud Chamber Orchestra, Chris’ playing has the vibrancy and the urgency of someone who is excited about what he is communicating.

RELEASEDED 2018: Song for Rob is Chris White’s latest album. 9 of the 11 tracks are originals of his. The basic tracks were recorded with four different guitarists and a singer-songwriter in Spain. Then White added more cellos, percussion, piano, bass and drums back in Ithaca, NY. Purchase the CD here https://newdirectionscello.org/product/song-for-rob/ Available for samples, downloads or CDs at https://store.cdbaby.com/cd/chriswhite14 or at iTunes or other platforms.

White’s development as a jazz and improvisational cellist has been strongly affected by his guitar studies of folk, rock and jazz during his formative years. These studies were largely self taught, and focused on learning by ear, improvising, experimenting, and studying chords – things which cellists are usually not encouraged to do in traditional study. As he began applying these skills to the cello, he found it to be a wonderfully versatile instrument for playing all kinds of improvised music because he could play melodies, chords, and bass lines. 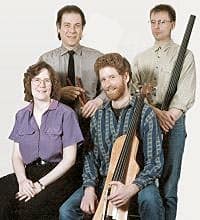 Back in the U.S., Chris completed a Master’s Degree in Music Performance at Ithaca College studying with Einar Jeff Holm. Since then he has published articles on the history of jazz cello in STRINGS (Spring ’89) and Down Beat (Feb. ’89).

Chris performed with his jazz quartet at The First World Cello Congress (June 1988) and The Quinzaine de Montreal (April 1992). He also performs regularly as a classical player with The Binghamton (NY) Symphony and frequently free-lances with chamber and jazz groups. An active private cello teacher, Chris is also on the faculty of The Community School of Music & Arts  and Cornell University in Ithaca. He also gives workshops on improvisation for cellists.

Chris feels the time is right for cellists to come together and begin sharing some of the new approaches and styles that cellists like himself are exploring. To this end he founded and directs the New Directions Cello Association & Festival, which maintains a web site, puts out two newsletters a year and organizes an annual festival dedicated to nonclassical cello. Guest artists at the festival have included David Darling, Mark Summer, Matt Brubeck, Eugene Friesen, Mike Block, Natalie Haas, Stephen Katz, Stephan Braun, Rushad Eggleston, Rasputina, Turtle Island Quartet, Hank Roberts and Bill Frissel and many others. The Panel of Artistic Advisors for the festival is comprised of Ron Carter, David Darling, Yo-Yo Ma, Eugene Friesen and Julian Lloyd Weber.

Chris White’s 2nd solo CD was “First Principles.” Released in 2003, this CD features Chris with the Cayuga Jazz ensemble. There are four original jazz tunes written by Chris and four by the group’s pianist Eric Hangen. White’s first CD, “Cello Again,” contains studio and live recordings of jazz cello with duos, quartets and quintets recorded between 1988 and 1997. White has produced a book and CD method (1997) for learning to improvise and play jazz cello called “Jazz Cello.” This method is also available for violin and viola, and he is working on volume two of this method. White has also recorded on CDs by many other artists in the US and in Spain.

Chris White is available for concerts, recordings, workshops, and consultations. Send him and e-mail at chris@newdirectionscello.org